Installed on the steps of The Commons Plaza in 2009, the Ram Horns sculpture, which is named Ramifications, consists of two 14-feet-tall bronze, spiraling cylinders weighing approximately 3,500 pounds.

Timothy Blum, a 1992 VCU Master of Fine Arts graduate, designed and created the sculpture.  Mr. Blum was the recipient of the Jacob Javits Fellowship, the Virginia Groot Foundation Grant and the Pollock Krasner Foundation Grant. He taught at the California College of Arts and Crafts and the Maryland Institute College of Art and at Hongik University in South Korea.  This web page outlines an outline of Mr. Blum’s work.

Timothy Blum passed away in 2013.  Writer Barry Kostrinsky reported in May 2013 in Broadway World that Mr. Blum, who resided in South Korea at the time, had passed away. In the article,  Mr. Kistrinsky said Mr. Blum was immensely proud of his studies at VCU’s sculpture program.  He wrote that Mr. Blum “was interested in sleep, dreams and the line between what we perceive to be real, the imagined and reality.” 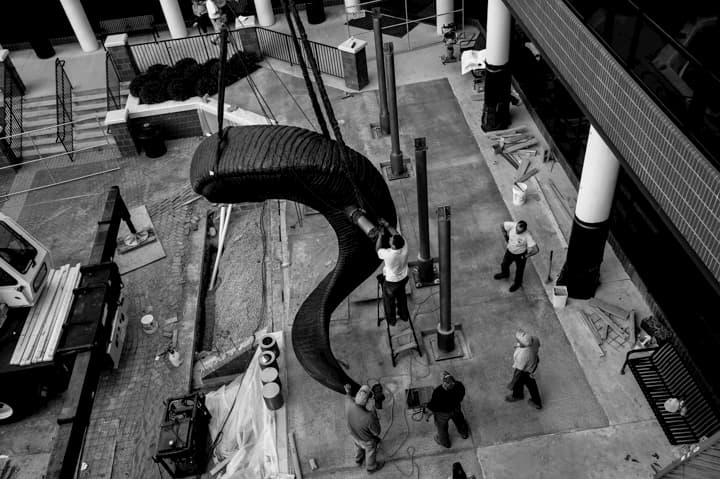 The sculpture is part of VCU’s ongoing “Art on Campus” program that began in 2007.  The program was created to introduce public art that would inspire and enrich those who populate both campuses.  The display of public art also emphasizes the University’s identity as one of the premier institutions for the study of art.

A commission that included Brian Ohlinger, the Associate Vice President for Facilities Management, Rick Toscan, the Dean for the School of the Arts, Jack Risley, the Associate Dean for the School of the Arts, and Sue Ann Messmer, the Vice President for Outreach, worked on the sculpture project.  Private and university funds paid for the $150,000 sculpture which includes two asymmetrical, hollow Ram Horns with a likeness of cupped human hands at the base of each horn.

Blum’s inspiration for the sculpture began while he was a student at VCU.  He had fond memories of traveling the country with his family and enjoyed the larger-than-life tourist attraction sculptures he would see such as Iowa’s giant frying pan, the numerous Paul Bunyan statues, and the 48-foot-tall cow in North Dakota.

These provided unique photo opportunities, so he envisioned a similar large-scale creation for VCU’s campus.    Blum was also interested in the historical role of the horns, especially as that of a magical weapon and noisemaker.  VCU is known for its creativity, energy, and artistic expression. Instead of a life-like mascot sculpture that you’d expect to find on a university campus, this Ram Horns sculpture embodies the unique spirit of VCU.

In 2011, a plaque was installed at the base of The Ram Horn sculpture. The plaque includes the title of the Ram Horns, Ramifications, and these instructions: “Speak into the hands and be heard.”  Early on you could blow into the Ram Horns to create a triumphant sound but, at some point, the hole for the horns was filled in so the horns are no longer a sound-making instrument.

A few years after the Ram Horns were installed, Kelli Lemon, Director of New Student Programs and VCU graduate, had the idea to incorporate The Ram Horns into a VCU tradition. To inspire a sense of belonging for new students, Ms. Lemon suggested the Ram Horn wish tradition. 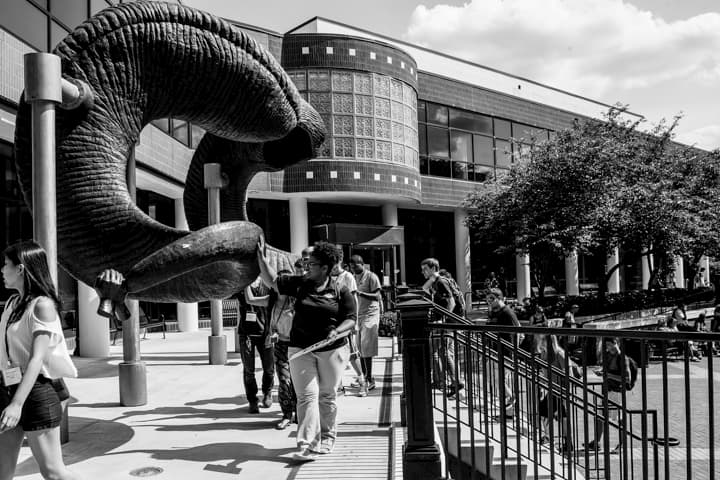 During VCU new student orientation tours, the student tour guides playfully encourage new VCU students to touch the Ram Horns and make a wish for wonderful things to happen during their time at VCU.

Many students say that while at VCU you should only touch the Ram Horns three times:

Just as sculpture Timothy Blum imagined, almost every day you will see VCU students taking selfies at The Ram Horns Plaza. To get the photo just right, students stand about 30 feet from the Ram Horns Sculpture and sometimes stand on their toes.  By standing in just the right “selfie spot”,  it looks like the Ram Horns are attached to your head! 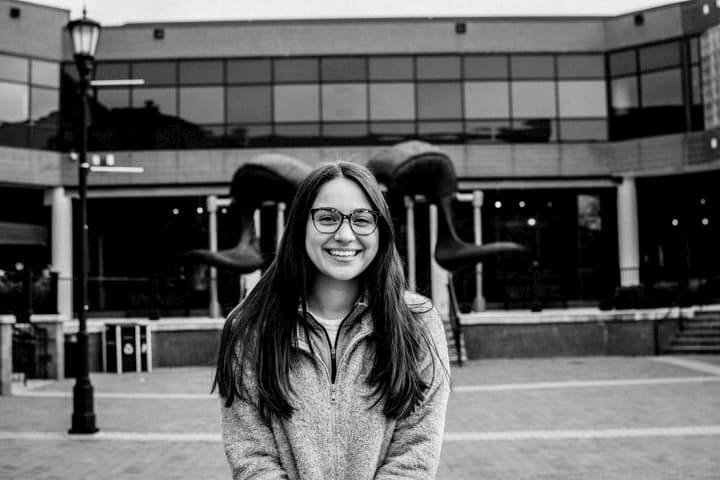