According to an article published on the Architecture Richmond website, written by Edwin Slipek:

“The Hunton Student Center building was originally designed by Thomas Ustick Walter (1804-1887) who was once considered the “dean” of American architects. He was a founder of the American Institute of Architects (AIA) and the classically-inspired buildings that he designed for Philadelphia once helped to define his native city. His commissions came from as far afield as China and Venezuela.  But most notably Walter designed the United States Capitol largely as it appears today, including the iconic dome and flanking chambers that contain the Senate and the House of Representatives.

In 1841 for the First Baptist Church, one of Richmond’s earliest and largest congregations, Walters built a Greek revival temple on the hilltop where East Broad and Governor streets meet. To compensate for the rather shallow building site, he dispensed with a full colonnade across the front, and built in antis. While this arrangement allowed for six colossal Doric columns, only two are free-standing. The outer four columns are pier columns. This arrangement provided additional interior space for stair halls that connect the sanctuary level with the second level balconies.

The building exterior has a granite base at ground level. The upper walls are brick covered in stucco that is scored to look like ashlar stone.

The highlight of the interior is the sanctuary which is in a remarkable state of preservation. The original pulpit is in place and old pews are in evidence.

The First Baptist congregation was so influential, and the design of its building so well-liked, that the Walter design served as the prototype for at least three other churches in Richmond. These included First African Baptist Church (two blocks east of Hunton on East Broad Street), and Fourth Baptist Church at 2800 P Street on Church Hill.

In 1927 the First Baptist congregation moved from this downtown location to a new and larger facility at the southeast corner of Monument Avenue and Boulevard in the then-suburban Fan District. The design of the new sanctuary’s exterior followed closely the design and detailing of the Walter church.

In 1938 the original former sanctuary was sold to the Medical College of Virginia (since 1968 the Virginia Commonwealth University Medical Center).” 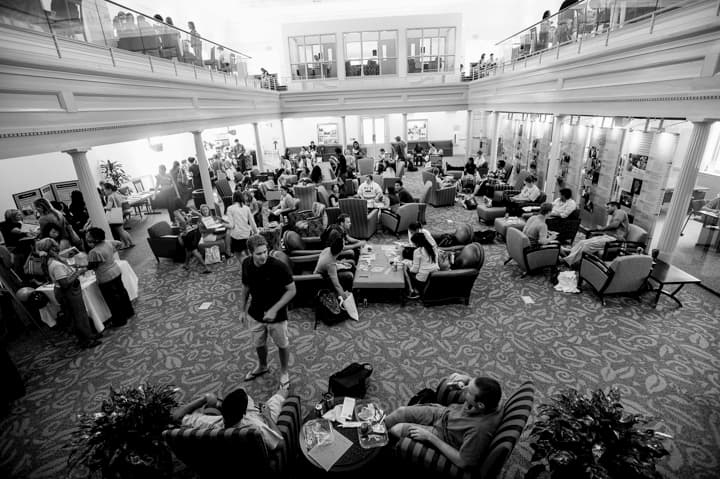 After purchasing the building, The Medical College of Virginia (MCV) referred to it as the Student Union. Hunton Student Center was officially the first student center for the university.

The student center building was placed on the Virginia Landmarks Register on November 5, 1968, and was added to the National Register on April 16, 1969.

The student center building was renovated in 1985 with generous support from the MCV Foundation and VCU's health sciences administration.

In 2005, VCU invested $5 million in a renovation of Hunton Hall. The renovations were completed in December of 2006 and included the replacement or upgrade of antiquated systems and accessibility and building code compliance. The Architect-Engineer for the renovation was Einhorn/Yaffee/Prescott Architecture and Engineering, P.C.

At this time, the management of Hunton Hall was transferred to the VCU’s University Student Commons and Activities department in the Division of Student Affairs and Enrollment Services. The VCU Board of Visitors approved the name change of Hunton Hall to Hunton Student Center to reflect a broader mission and the building’s history as a student union.